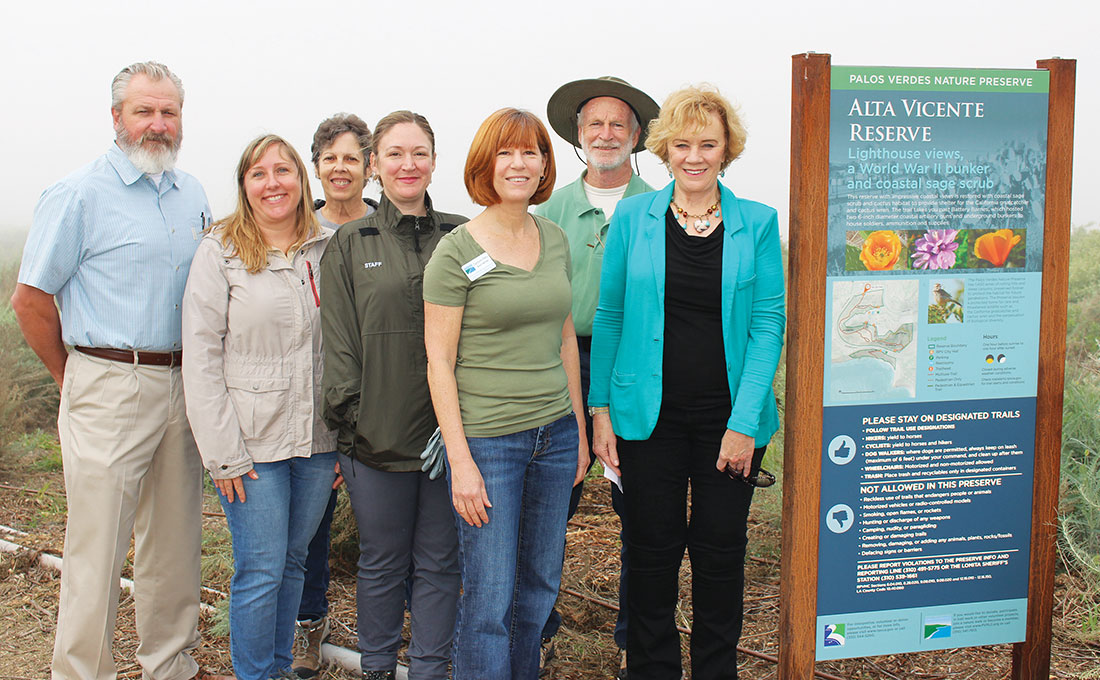 Visitors to the Palos Verdes Nature Preserve this year will be greeted by new, welcoming signage. With a palette inspired by the landscape’s green hillsides and blue ocean, the signs incorporate rustic stone and weathered steel for a modern look that is also resistant to vandalism. The signs feature identification and orientation panels with information about the surrounding habitat, trails and regulations.

The City of Rancho Palos Verdes and Palos Verdes Peninsula Land Conservancy worked together on the project to create signage for the Preserve’s entry points. The new signs seek to educate the public about the Preserve’s special protections and features as a conservation area for wildlife and habitat. Executive Director Andrea Vona explains, “Each sign was designed to raise awareness and inspire appreciation for these places as important conservation areas and to ensure that visitors are informed about the regulations and designated trail routes.”

The signs also seek to enhance public safety in the Preserve by informing visitors of the name of each area, (vital information to have in case of emergency) and also include Preserve rules and instructions for contacting law enforcement.  According to City of RPV Mayor Susan Brooks, “The signage concept and design plan with enforcement in mind were well received at a previous City Council Meeting, Preserve Public Forum meetings and stakeholder meetings. Public input has been invaluable to this project.”

The first signs were recently installed in Alta Vicente Reserve and Portuguese Bend Reserve, two of eleven areas that comprise the 1,400 acre Palos Verdes Nature Preserve. They were unveiled at the Conservancy’s Martin Luther King, Jr. Day of Service volunteer event. Hunt Design, an internationally recognized consulting firm specializing in wayfinding design, signage systems, environmental graphics and exhibit design for public spaces, parks and museums completed the construction drawings for the project. Support was provided by Los Angeles County Regional Park and Open Space District and the State of California Habitat Conservation Fund. Additional funding from a generous anonymous donor will allow for signage to be installed at Agua Amarga Reserve this spring. The City and Conservancy are seeking additional funding sources to implement the signage plan throughout the remaining Preserve areas.