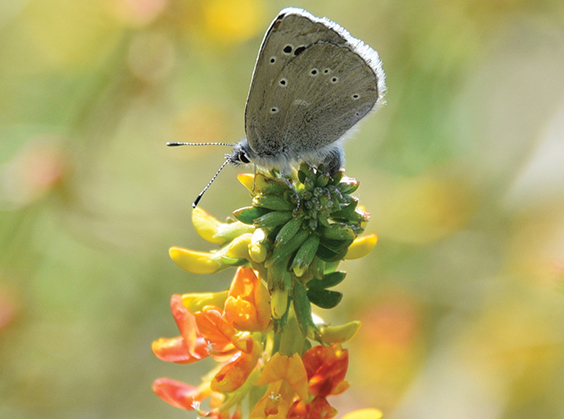 The release of captive-reared Glaucopsyche lygdamus palosverdensis is a milestone in government’s multi-year effort partnering with the Conservancy to reintroduce the PV blue to the Palos Verdes Peninsula. The species was originally thought extinct until a sighting in March 1994. When the butterfly was rediscovered, the Conservancy helped form a consortium for a captive rearing program to bring it back with America’s Teaching Zoo at Moorpark College, the U.S. Navy, U.S. Defense Logistics Agency, U.S. Fish and Wildlife Service, California Department of Fish and Wildlife and The Urban Wildlands Group.

The Conservancy plays a critical role in this partnership by planting the unique native host plants the species requires to survive.  This involves collecting seeds and nurturing seedlings at the Native Plant Nursery until they are ready for planting; removing invasive weeds; planting host species; and watering, protecting and monitoring the vegetation in restored areas where butterflies will be reintroduced. Dedicated volunteers and supporters work with the Conservancy to make all of this possible.

Dr. Jana Johnson and her student team from Moorpark College oversee the release of captive-bred butterflies at the end of their flight season, which extends from the end of January to early May. In 2020, the butterflies were simultaneously released at various life stages in four different locations in Conservancy-restored native habitat. These locations are not being disclosed to the public to protect the butterflies so they may peacefully enjoy restored habitat planted with their two host plants: Deerweed (Acmispon glaber) and Milkvetch (Astragalus trichopodus lonchus).  These release sites are located within the species’ historic range. No PV blue butterflies have been sighted there since the early 1980s.

The initial results of the captive release program yielded promising results. “Two days after the historical release in 2020, we observed breeding behavior and egg laying by the captive-bred butterflies mating and ovipositing (laying eggs) onto host plants. Both males and females were active.” said Conservancy Biologist Austin Parker, a certified Palos Verdes Blue Butterfly Monitor who surveyed all the release sites in March 2020.

Conservancy Executive Director Adrienne Mohan explained, “We are hoping to see the beginnings of a new viable “wild” population of PV blue butterflies on the Palos Verdes Nature Preserve and are likely to be undertaking more releases in Spring 2021 to continue to bolster populations. Our hope is that in decades to come, the Palos Verdes Nature Preserve will be speckled with fluttering blue wings each spring.”